Visit another city outside Amsterdam

Even though Amsterdam is by far the most famous city in the Netherlands, it’s certainly not the only one worth visiting, especially if you’ve got a day or two extra. Fortunately, there are many good options that are each within an hour of Amsterdam by train, and an ambitious traveler might even try stopping in more than one in a day.

Many tourists from all over the world visit Alkmaar for its cheese market,a particular spectacle which includes a market filled with all kinds of Dutch cheese and hauling cheese carriers. In 1365 Alkmaar was granted weighing rights and a weighing scale, and in 1612 this numbr increased to four. Exactly when the first cheese market took place is shrouded in mystery. Old documents have been found that confirm the cheese market definately took place in 1622, but there is also evidence that the cheese bearer's guild was founded in 1593; we can therefore deduce that there must have been a cheese market at that time as well. 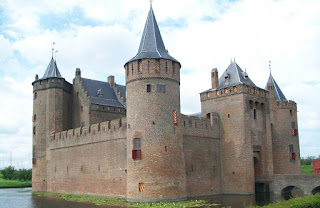 The best known and perhaps most beautiful castle in the Netherlands is just outside Muiden: Muiderslot. Two famous names in Dutch history play a large role in the story of this fortress, Count Floris V and writer PC Hooft. Just outside Amsterdam, at the mouth of the river Vecht is a castle from the outside quite fit the romantic image that you can have with a medieval castle. Stone walls, battlements, a moat, thick towers with pointed roofs; you can see the knights and ladies certainly for you. Inside, however, it is as if you were in a painting by Jan Steen, Vermeer and other 17th-century painter of interiors have arrived. 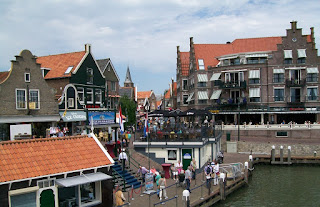 Three picturesque Dutch villages; Edam, Volendam and Marken close to one another and only a short trip northeast of Amsterdam.
A Dutch day trip to Volendam, Edam and Marken 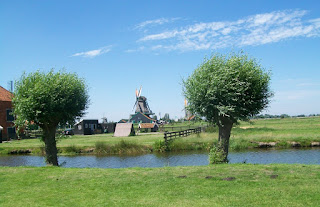 There are still many windmills  around Amsterdam, it's absolutely worth to visit the old factories and some of them are still working. In Zaanse Schans for example, you can have a look inside.
Windmills in the surroundings of Amsterdam

Rotterdam
The second largest city in the Netherlands is home to one of the world’s largest ports and a very pleasant center area that is almost all new, so it contrasts nicely with Amsterdam. There are some interesting things going on in the harbor, as well as some pretty good museums.

Den Haag/The Hague
Most of the government offices are in this somewhat sterile city on the coast, but it has a modern center and also some of the best museums outside the few famous ones in Amsterdam.

Delft
The famous blue and white pottery called Delftware is still made here in a few factories that love to show off the technique to visitors, especially those who might be interested in buying a piece or two. It’s in between Den Hague and Rotterdam, and a quick stop for those going from one to the other.

Utrecht
This is where you’ll find the largest university in the country, as well as a historic city center that beats Amsterdam in some ways. The Dom Tower of Utrecht is the city’s most famous sight, and probably worth a quick trip there by itself.

Accommodation in Amsterdam. About Amsterdam How to explore AmsterdamThe most popular tourist attractions in AmsterdamInformation about canal cruises in Amsterdam
Flowers in the surroundings of Amsterdam